It was a ménage a trois of any guys dirty fantasy! It was a mixture of unlimited booze, immaculate cars, and unadulterated enjoyment that would tickle your fancy for precisely 72 hours. If that didn’t catch your attention then I don’t know what will. H2O International would be the pinnacle of any automotive events that I have ever attended, unfortunately I say that with both a feeling of great joy and deep regret. Yes…I said regret, because I’ve been hearing so much great things about H2O for as long as I could remember yet it took me this long to put on my big boy pants and actually went. I honestly showed very little interest in the Audi/Dub community prior to this event, not because I’m a “JDM fanboy” but it was more about the lack of aggressive appeal in design and styling those car possesses, especially the VW automobiles. My taste in European cars was refined by my father’s obsession with all things Mercedes and that was as close as I get in showing interest in these water-cooled cars. But that definitely did not stop me from showing my passion for cars this past weekend.

Going into this trip I wanted to try to capture the vibe and atmosphere of what H2O was really about. Sure there were countless meets that was setup to please different congregations, but I felt like everyone was going to cover just that…strictly cars that sat at the parking lot motionless. So given the opportunity (you’ll see what I meant as you read more into this) I captured the menagerie that would take place up and down Coastal Highway. It was one of the most chaotic yet pleasing experience I have ever witnessed in any automotive related events. From vintage Volkswagen strutting it’s poised and ageless body styling to a younger more menacing bodylines of dumped Audis challenging its counterpart with brute force. The combined presence of these cars gives you a certain feeling, a feeling that confuses your inner ability to take action (sort of like your first erection). There were so many chassis alike yet each one was executed with a unique style of its own and careful precision. It was a reaction I wasn’t expecting from myself especially the fact that I was never able to convince myself to like these cars. To say the least I was in awe as I watched these cars passed by me in both direction while I stand in the middle on Coastal Highway frantically trying to catch up with everything my mind was absorbing.

Despite the shenanigans that went on, for our media crew it wasn’t all about punishing our liver (or so I thought) and aimlessly driving up and down the strip to showoff our ego. As a group we had intended to follow a set of schedule and responsibilities that everyone was going to be accounted for. We were all trying to record every eventful situation that went on through out the weekend to provide our supporters with the best coverage from different perspectives. I was assigned to not only take pictures of the car but also the models in which the final result will be use for our next batch of stickers. With such a difficult responsibility (NOT!) somehow we managed to get back to those magical beverages to enhance our H2O experience. Even though some mishap occurred along the way, our team stayed positive and made the best out of every possible situation. At the end I felt like everyone had an amazing weekend and until today I’m still looking for the replay button.

En route in the a.m. 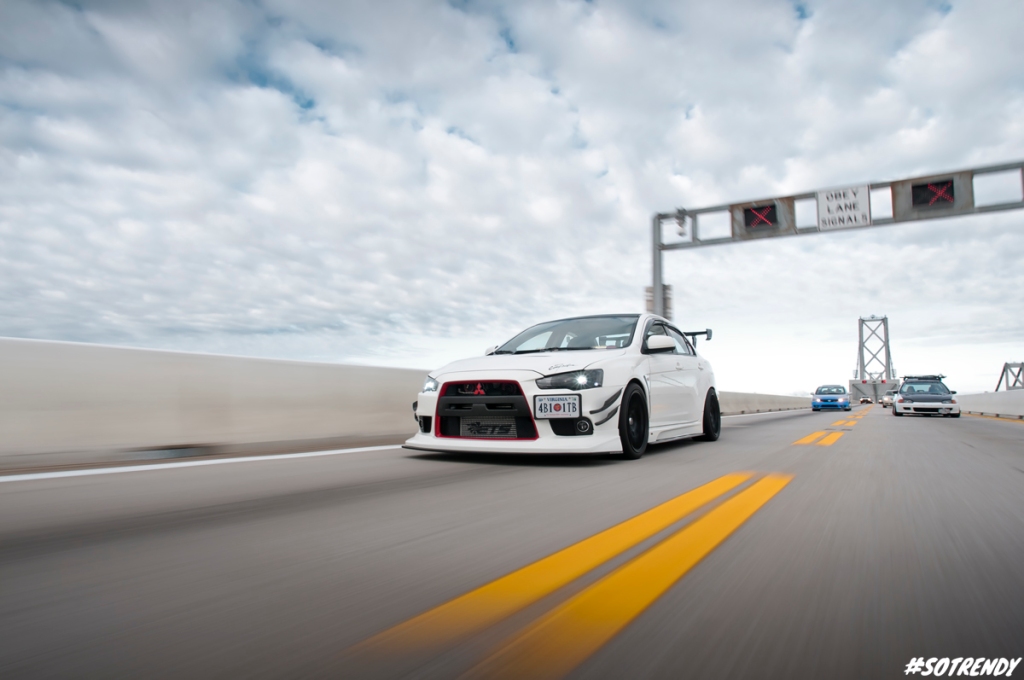 Once we arrived, we quickly pulled up into an empty lot right next to Satellite Breakfast House hoping to get seatings. While we waited for everyone to come I decided to go around the lot and snapped a couple of stills of the cars that were present.

Unfortunately once we rounded up the Scooby Gang, the wait time at Satellite was conflicting with our schedule so we decided to head to another place.

So we settled for some omelet and crepes while others started their day with a cocktail.

After we refueled our empty stomach, we headed straight to the Sotrendy meet. We were kicked out out of the original plaza where we had intended to hold the meet but that didn’t stop us from finding a better and friendlier location.

Slant nose 911, pretty sure everyone was going wild over this. We cannot wait to shoot this at FCF.

Like I said I didn’t take that many stills, I believe you’re going to see more of that on part 3 of this coverage. Towards the end of the meet I decided to tag along with the rest of the crowd and watch countless cars maneuver the decline out the shopping center. 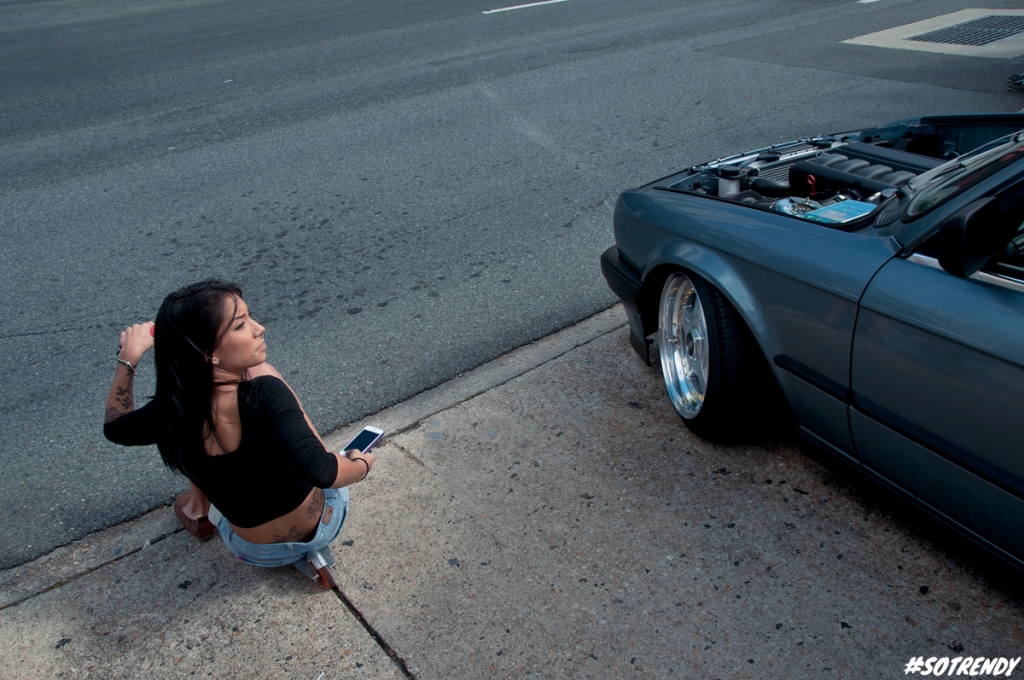 Hoodless mk with the scooter girl 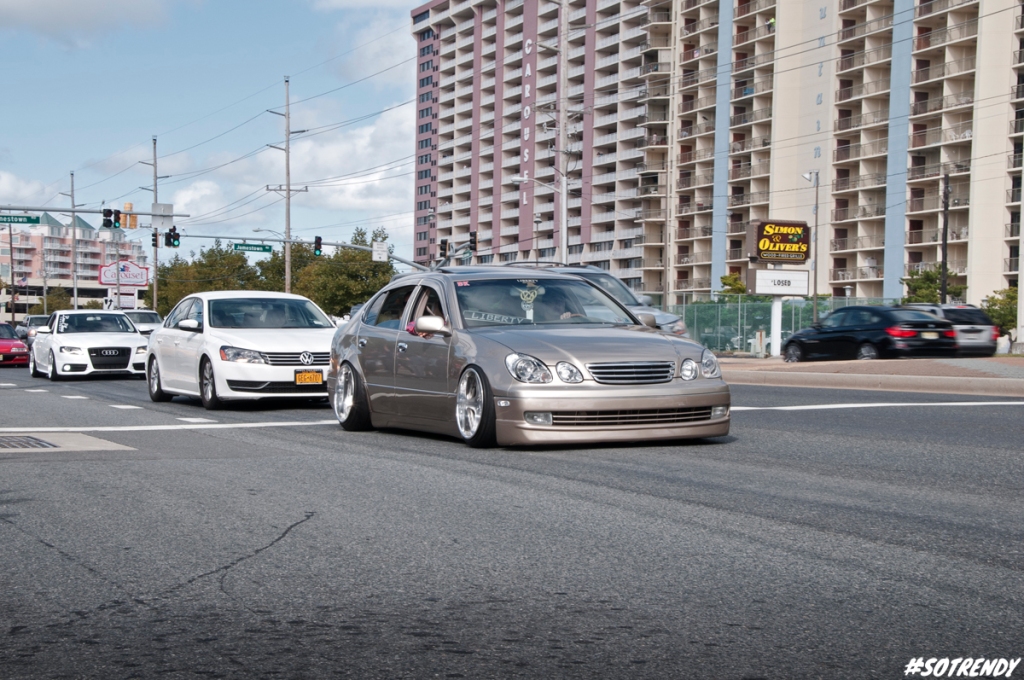 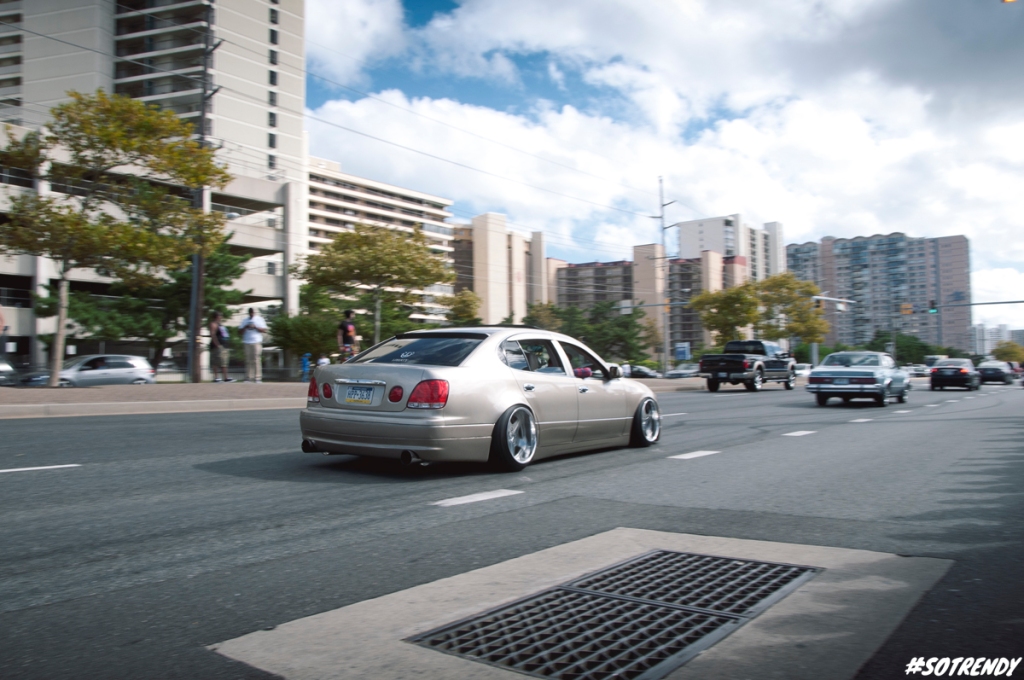 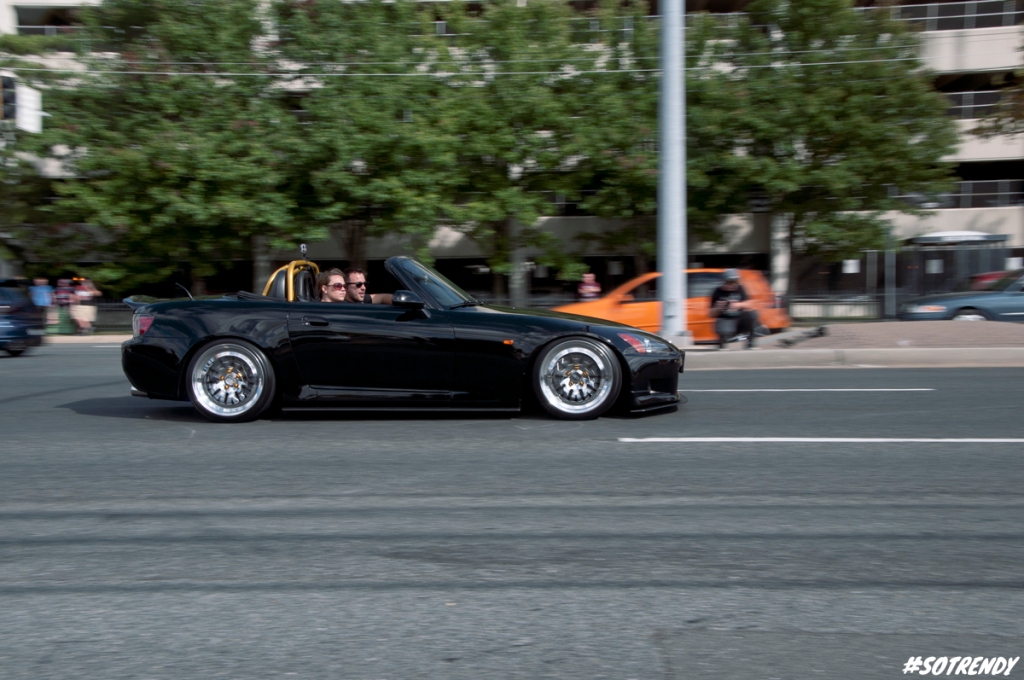 Black AP1 sporting what looks to be CCW wheels 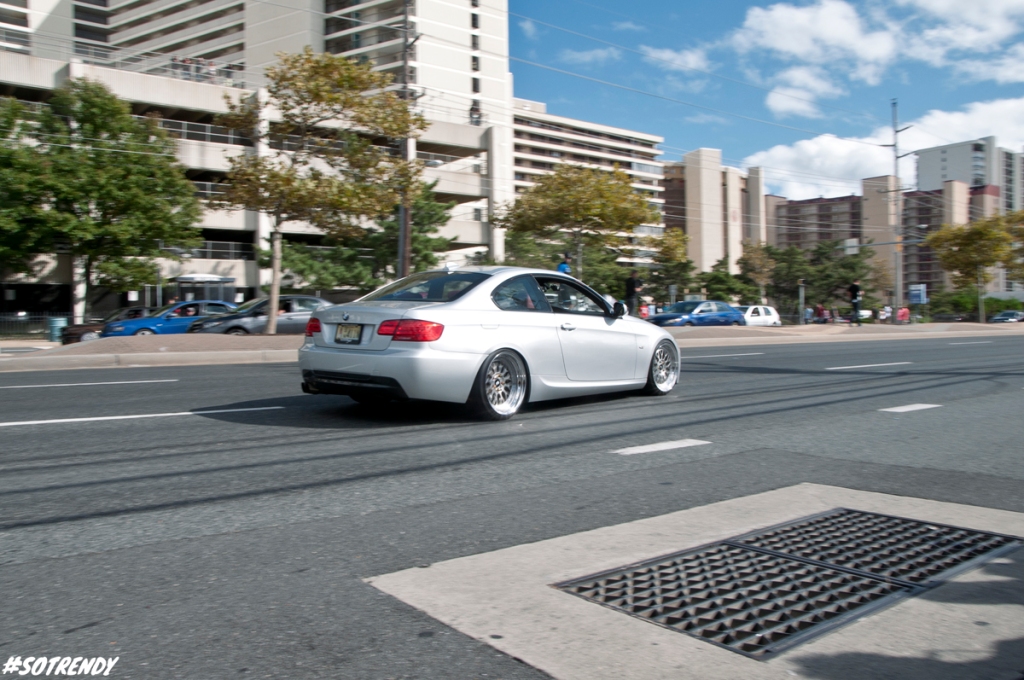 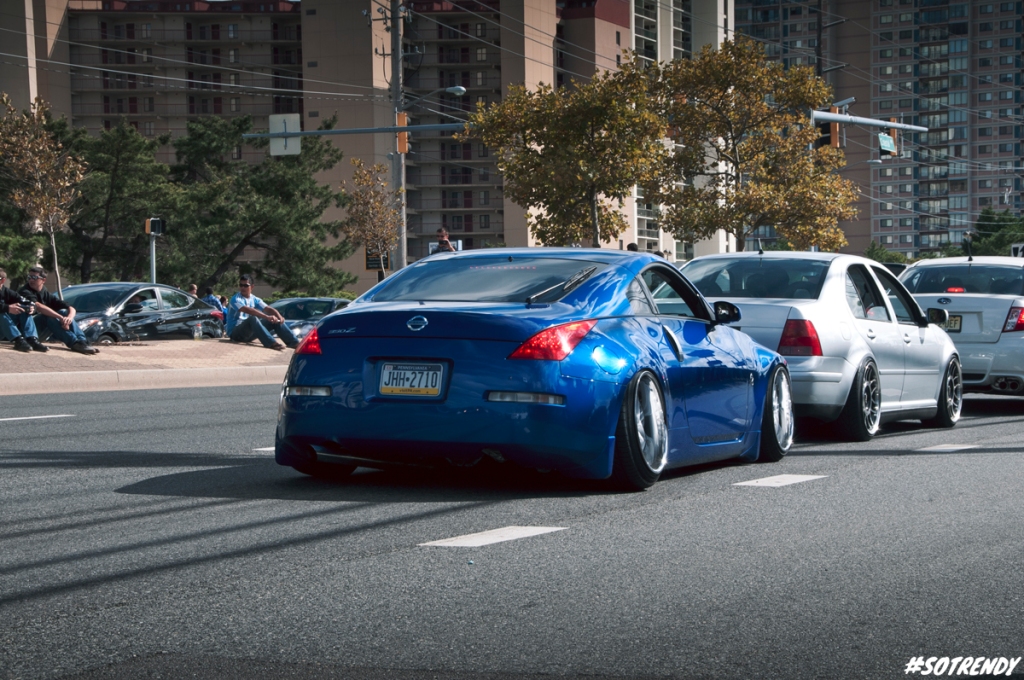 I was always a fan of the Z chassis, it has such an appealing rear end

After the madness we were planning on heading to the beach for our model shoot, unfortunately while we were driving down Coastal Highway the clutch master cylinder decided to give on Sebastian’s S5. As a result we ended up pushing the car off to the side on 70th street and waited for help to come.

The man behind Twreck FIlms trying to lighten up the mood as we waited for help to come. Honestly I felt really bad that this happened because if it was me it def. would’ve ruined my weekend. But hats off to Sebastian for staying cool and most importantly positive

Since we came as a group, we didn’t want to leave Sebastian by himself even though we had somewhere else we need to be. While everyone was waiting JD and I decided to go out off of 70th and capture the cars passing by. I took this as an opportunity to capture the vibe and atmosphere I mentioned earlier. Essentially that’s what H2O is all about, its centered around the enjoyment of each others company who share similar passion and driving aimlessly down Coastal Highway with the best tunes playing out of your sound system. And to top it all off the weather was perfect and couldn’t have been any better. 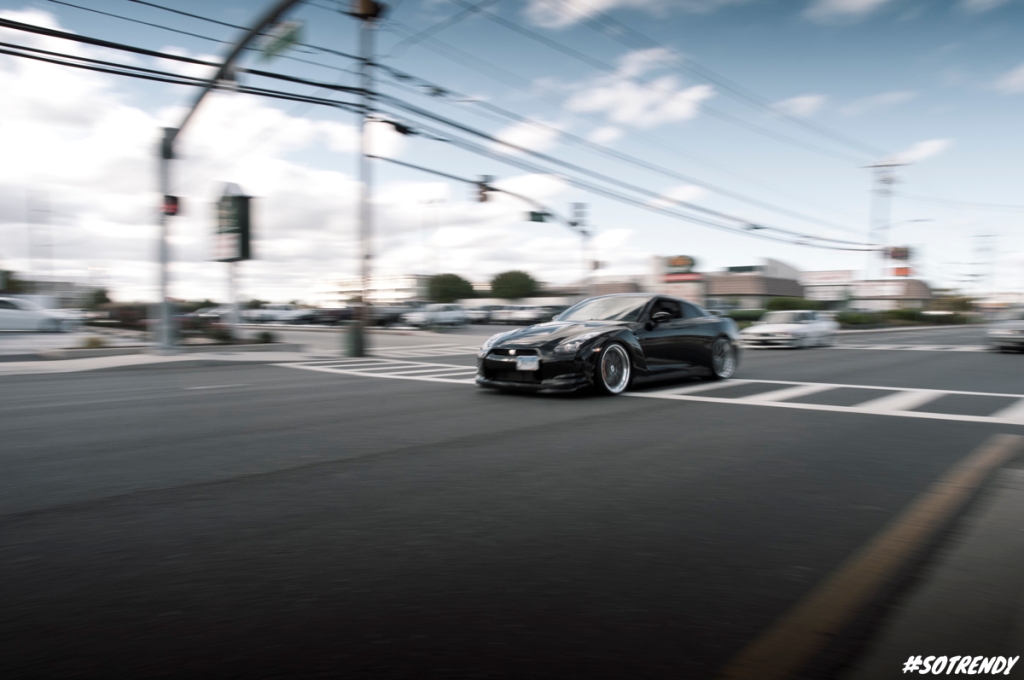 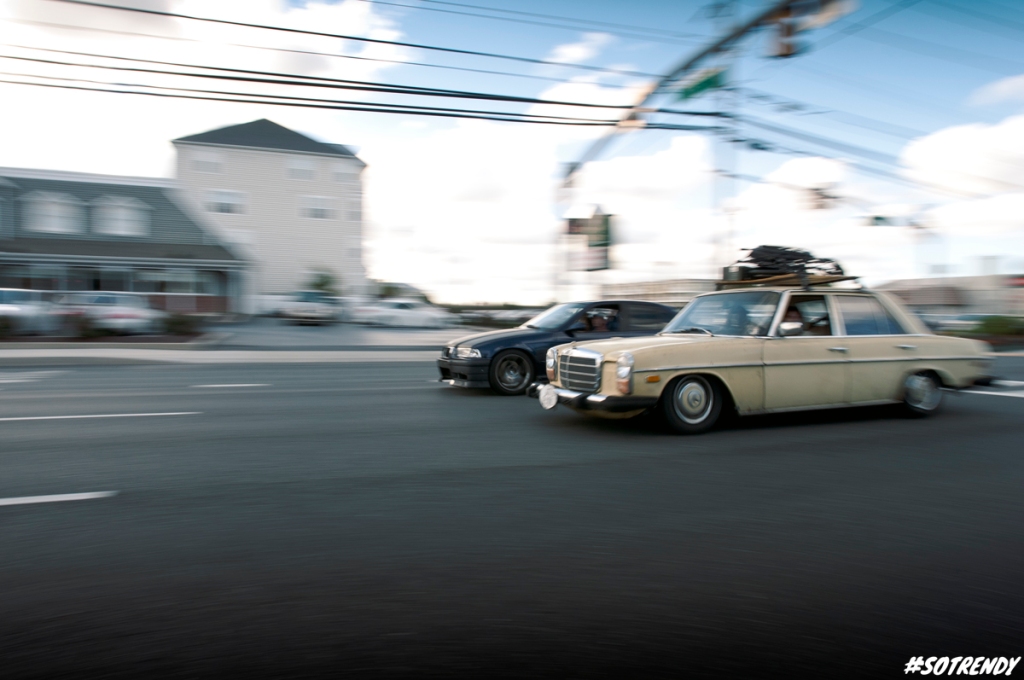 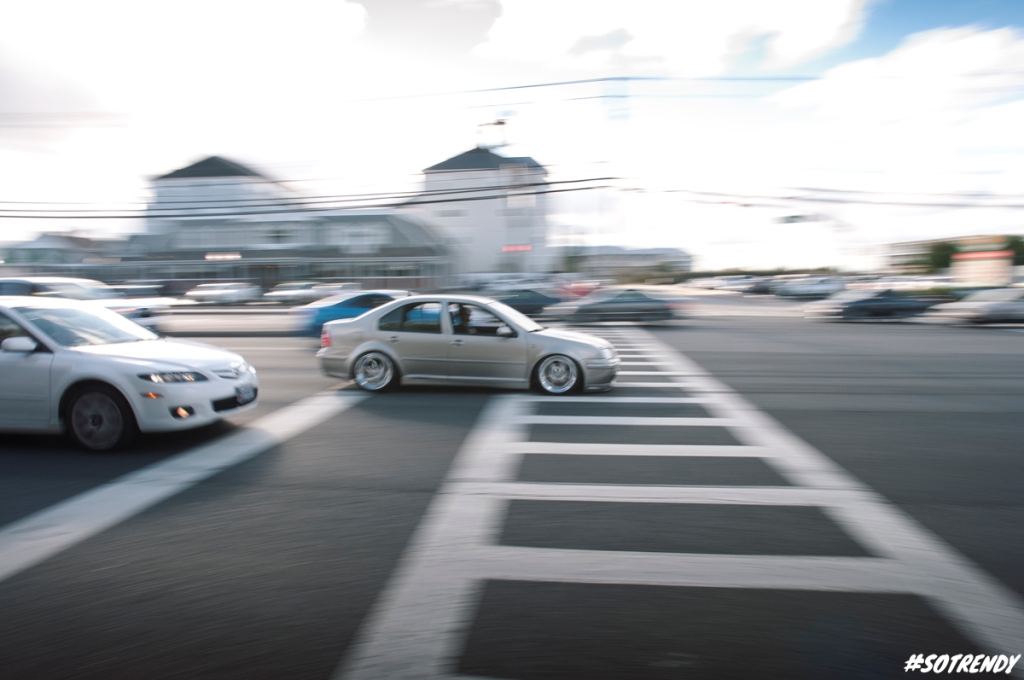 Like many of my panning shots, I’m not sure how my camera managed to focus in only on the interior of the car #scumbagcamera

This S5 is looking gorgeous gleaming in that red color 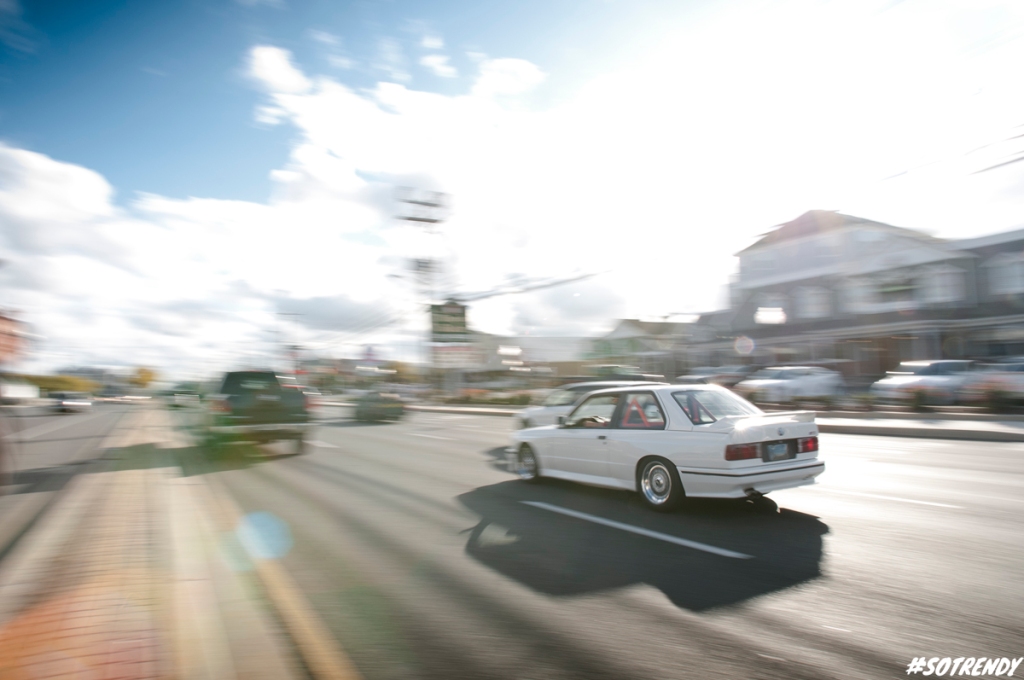 One of the many cars that I wanted to see up close was this Chaser (JZX100). 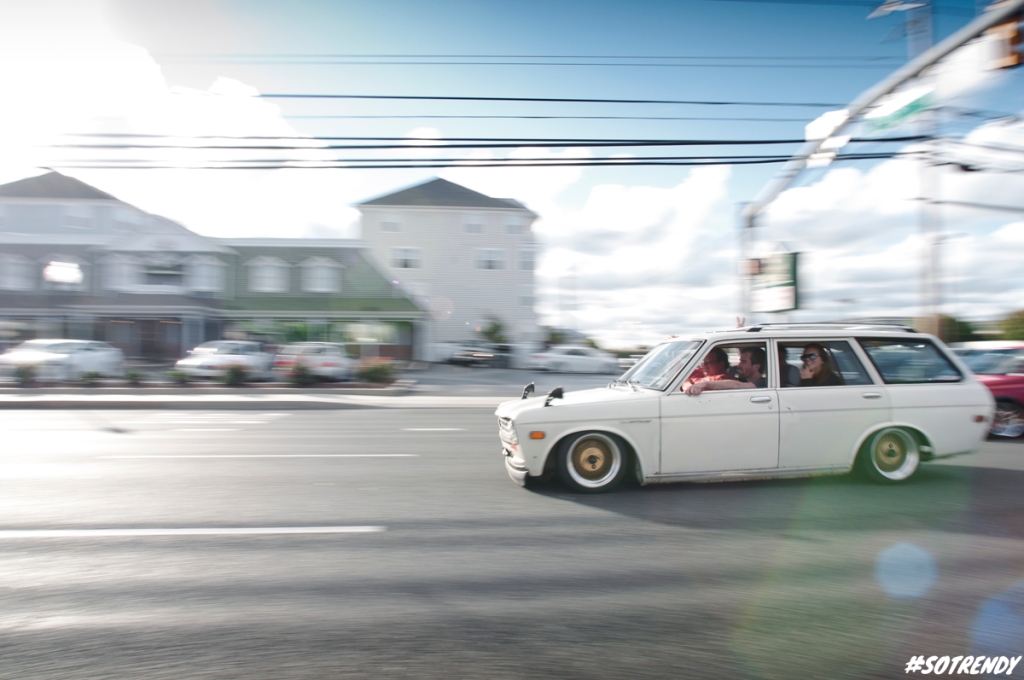 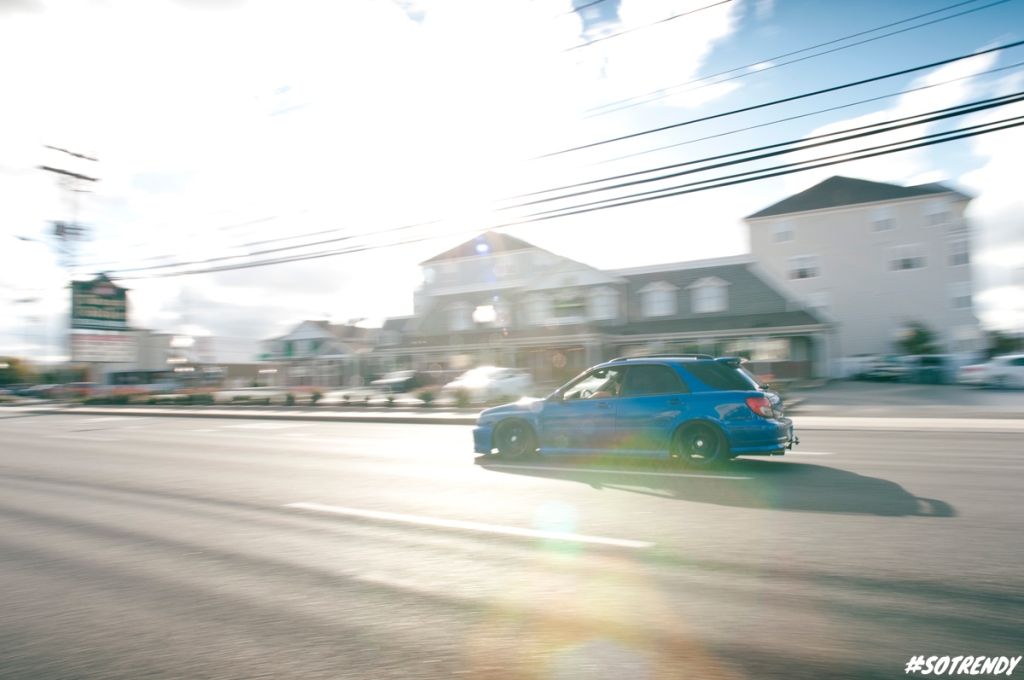 shoot straight into the sun they say, it’ll be fun they say

I believe this is the same Z that I posted earlier

This thing was perfect! the TT of course 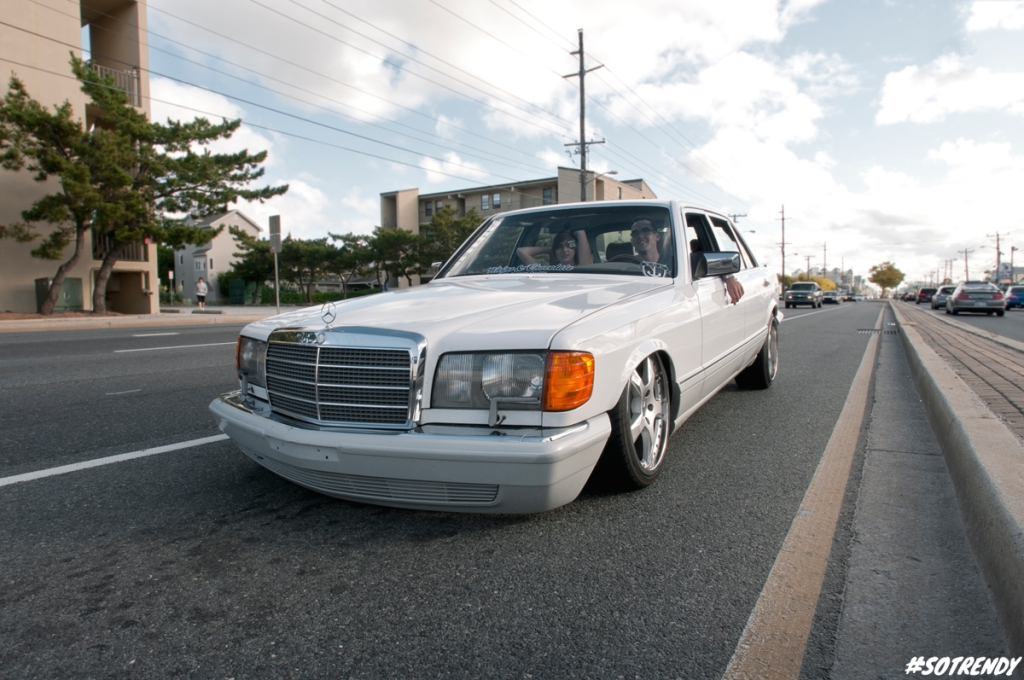 S Class from TGC (The Governers Club). Hittin that switches! 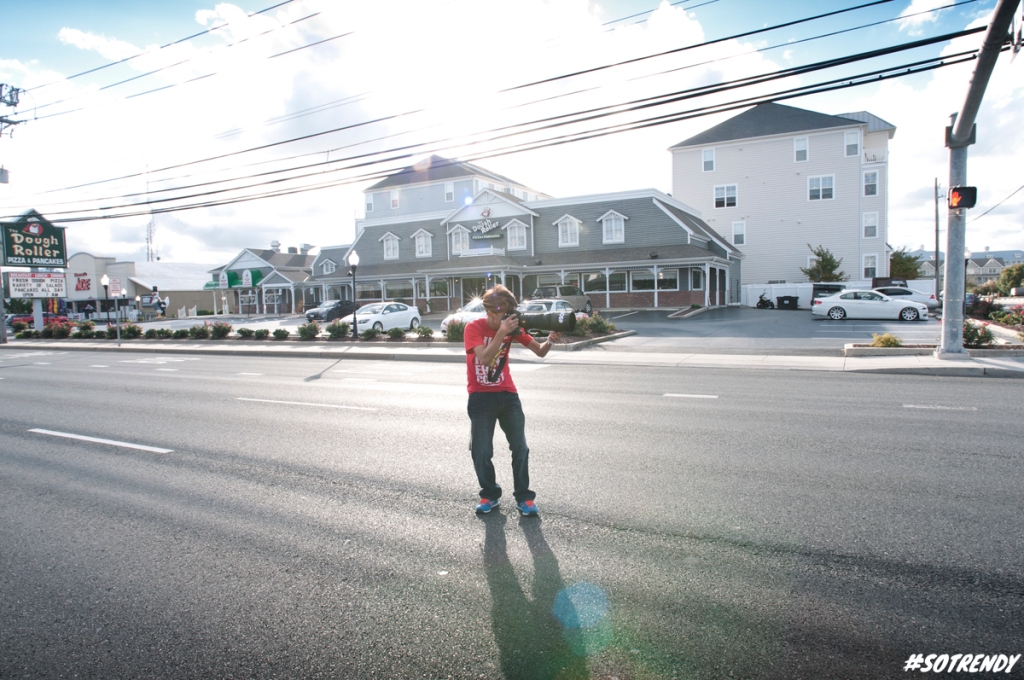 KC image and the potato gun he calls camera doing whatever it takes to get the shot, even if it means possibly dying

I don’t think I have ever taken this many panning shots before, but it was definitely a learning experience as I was shooting on both sides of the median. Since I was shooting both towards and away from the sun I was constantly changing the settings on my camera which proved to be a bit difficult considering I have to keep up with the amount of cars passing by. But I didn’t want to shy away from the challenge because not only was I doing said things but I was frantically trying to pick out the car amongst the regular cars in traffic as they were coming towards me. This experience gave me a sense of excitement in which I don’t think I can get from any other car events (excluding track side events of course).
After a solid hour Sebastian’s help came and off I went to the boardwalk to meet our “model”. Long story short, our “model” decided that she wasn’t ready and didn’t feel comfortable even after careful planning. We wasted no time and went back to 70th street to accompany the rest of our friends that came to help Sebastian. In light of a very shitty situation of everything not going to plan, Sebastian saw an opportunity to turn everything around and make the best out of it. There was an empty lot leading into the beach which was very secluded and it was calling our name. Since we had four photographers with us we decided to do an impromptu photo shoot.

Neil’s MR2 form earlier, also you can see the guys fading in the background as they walk up the hill to set up for the shoot 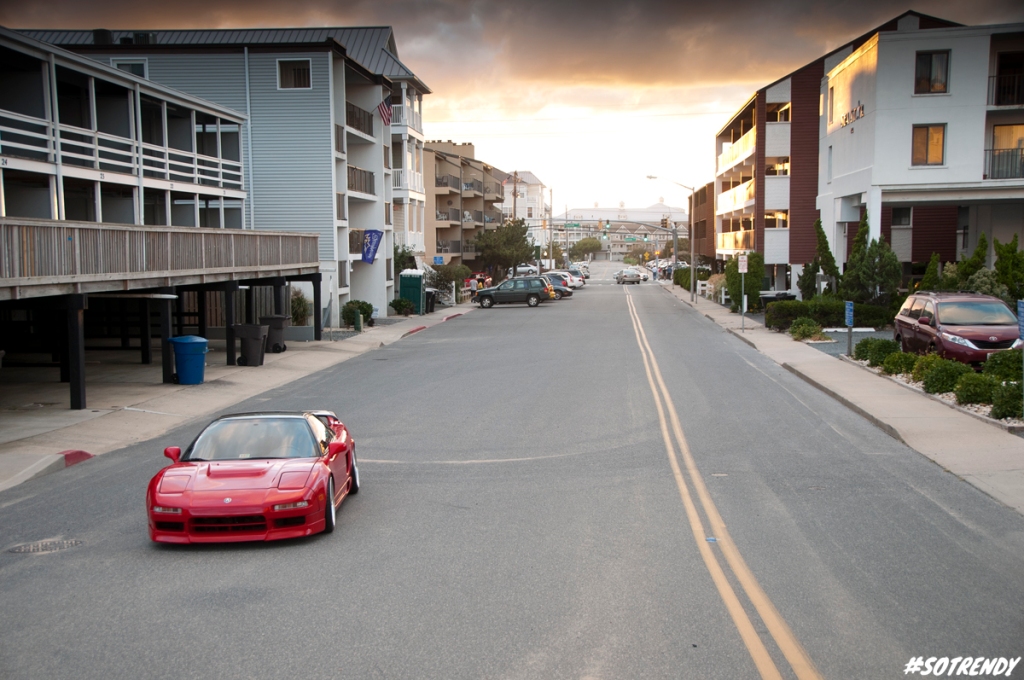 Aj’s immaculate NSX, I have lost count on how many times I setup an appointment to shoot with this guy and finally I was given the opportunity 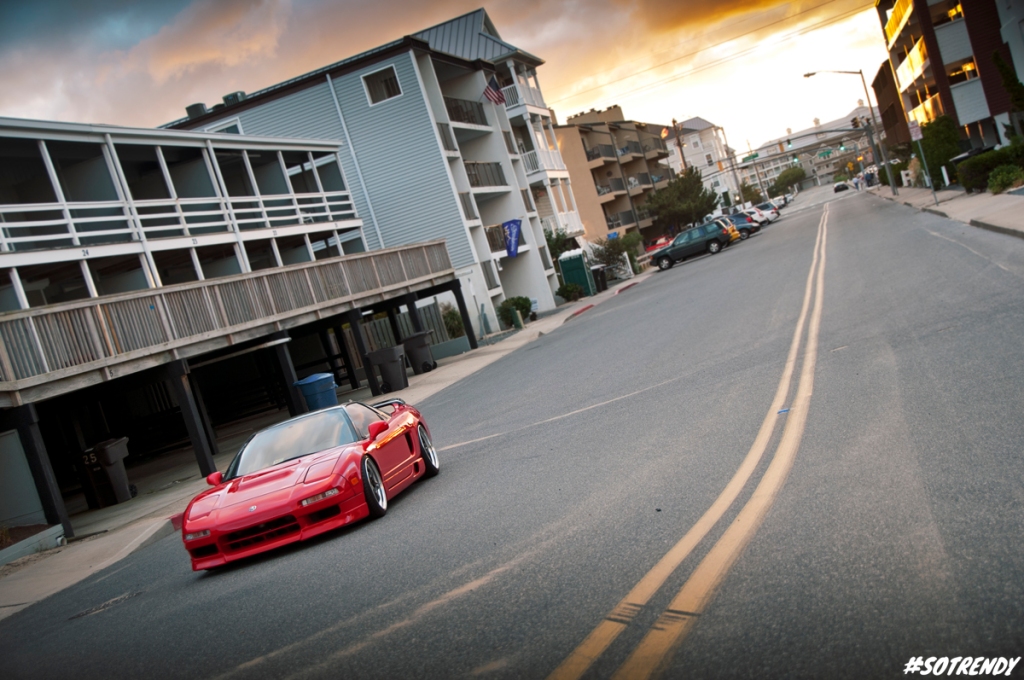 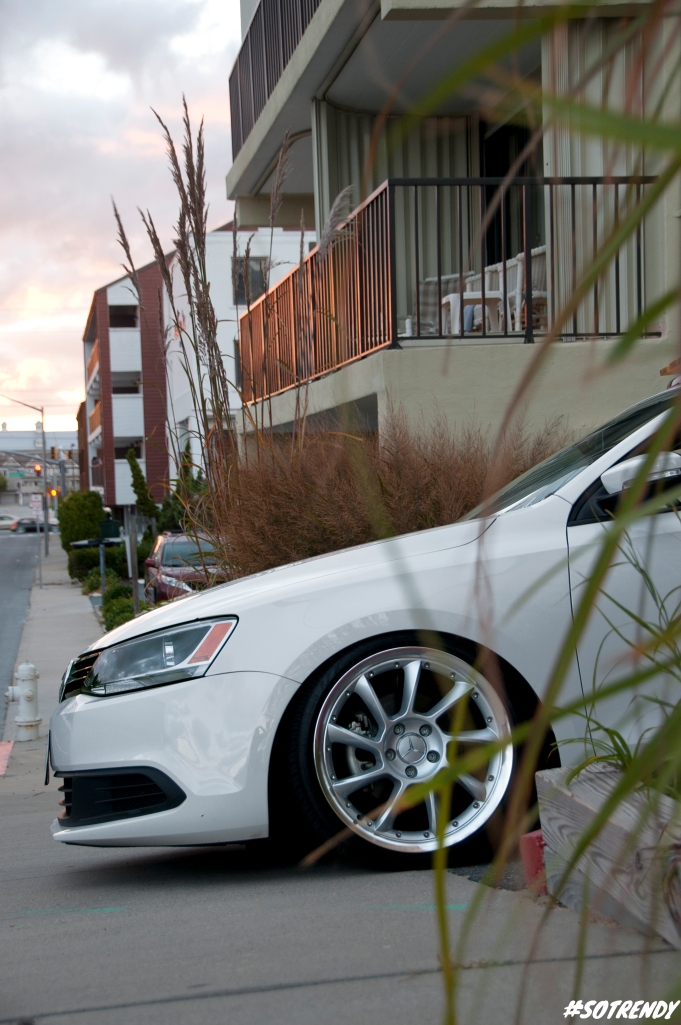 JB lurking on a side alley

SotrendyTim, the creative mind behind the polaroid coverage

After this little get together we had, we headed over to Fat Daddy’s for a group dinner which was beyond amazing considering how hungry we all were. Out of all the restaurants that I’ve eaten in OC, Fat Daddy’s is surely my number one go to place, the price was reasonable and the food tasted incredible. As night time came upon us we all went our separate ways as some of the guys went back to the hotel and exercise their liver some more and myself along with 2 other guys went to another model shoot we had plan. Now I cannot give you guys full exposure of the shoot but I will give you some appeteaser.

From this point on it was only right to give a sincere apology to our liver, stomach, and kidneys as we downed a somewhat tolerable amount of alcohol to end the night. Our internal organs was in the mercy of our raging ego and a burning desire to further enhance our H2O experience. Things went on in the hotel room that should be not disclosed and with that being said I will conclude part 2 of the Sotrendy coverage. Hope you guys enjoyed my article and photos and stay tuned for part 3!

There was an error retrieving images from Instagram. An attempt will be remade in a few minutes.